Apparently, it's just some guy who likes to hide in spider-holes and who carries a little sample of saddam's DNA inside his mouth.

But the guy they did find has been the most wanted man on the list of the Royal Society for the Protection of Beaver's for some time now. 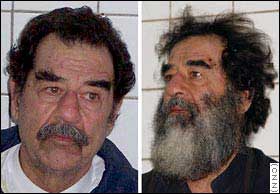 The US are also supporting an urgent review of the United Nations rules on the legality of parading the head of a prisoner of war around on a stick.

A US proposal hopes to redefine a stick to exclude any non-wooden shaft-like devices. This will clear the way for Tuesday morning's planned head parade, for which a number of tickets have already been sold.

"Our folks have already authorizated the whole shindig," explained United States president G.W.Bush. "We're gonna have ourselves a genuine head on a stick parade, whether those damn Frenchies like it or not!"

In order to circumscribe the United Nations rule on the treatment of prisoners, the alleged former Dictator Saddam 'Insane' Hussein has been instructed to cut off his own head and impale it on the 'non-stick like' metal shaft all by himself.

"We have given him a knife and we have a drawn a dotted line on his neck," explained the United States Military's Chief Medical Officer. "Now it is just a matter of time."