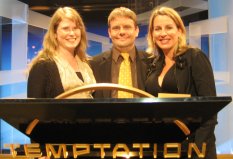 Hey groovers, particularly those in Australia, be sure to watch the television show 'Temptation' (aka 'The new sale of the century') this week, as my brother John will be a contestant on the show this Thursday. And of course if he wins he'll appear on subsequent shows until he is defeated, takes the money and runs, or is arrested for cheating.

John has always been a legendary quiz master within our family. When he was maybe eight years old, he was faster and more knowledgeable than all the adult contestants in the show. I thought then that if they allowed kids to compete against the adults, he'd be sure to become a champion. This week we'll find out if the intervening years have enhanced or depleted his childhood genius. ;-).

Long time readers may recall that, last year, John's wife Al went on the same quiz show. Al did well but was trumped in the fast money. The highlight (for an irony lover like me) was when Al won a 'Who Am I' question, with the answer 'Germaine Greer' (outspoken feminist) and received a cosmetics package as a prize. This was sort of the equivalent of winning a hand gun after answering 'Mahatma Ganhi'.

So Thursday and beyond -- watch for John on channel 9, 7pm.

(By the way, the photo is of my Sister in Law, Allison, my brother John, and my sister Jody. Allison and Jody are both due to have babies in the near future. Another generation of contestants in quiz shows, no doubt.) Next → ← Previous