and this maxim has been my good friend for a long time.

But sometimes the stupidity is too acute to be plausible. Surely stupidity has limits?

Here's a case that left me gobsmacked.

For the last few years, airport security checks have been confiscating any liquid that is over 150ml or is not in a clear container. This is due to a security scare at some time. Fair enough, I accept that.

It turns out that they are also confiscating items purchased in-transit -- perfumes and duty free liquor, for example. I accept this too: I mean it's stupid, but it's within the usual bounds of plausible stupidity that we encounter every day. It's been going on for a few years now.

But here's the case of implausible stupidity I encountered last week at Syndey airport.

There's a duty free store encountered in-transit, just before a blind corner, at which there is an unexpected security check point.

So a store is selling items to people who will be forced, just 10 metres down the road, to relinquish their purchases.

Here's my mud map of the situation: 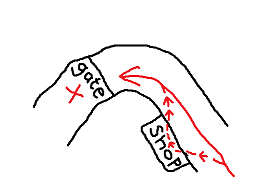 (Note that I didn't suffer this fate myself, I witnessed it happen to about 10 percent of the people from my plane.)

You walk around the blind corner and you enter a small, fast moving security check point.

Once your liquid goods have passed through the x-ray machine, they are confiscated. Everyone looks surprised. Even the security guards act like this has never happened before.

For many of the victims of this situations, this is their very first experience of Australia. Some kind of a crazy country where everyone is out to trick you.

(My wife and I were so impressed by this, that we found a quiet spot to observe the security checkpoint from above. It definitely wasn't an isolated case, it was very common. And the security guards looked amazed every time.)

I am pretty sure there's some organised crime occuring here, because the alternative explanation, stupidity, is just too impossible to be believed.

In the absence of a criminal conspiracy, here's 6 solutions that would've been better than confiscating the liquor:

But what's really going on here? What do you think happens to all that liquor?

I sincerely hope that there's a racket of some sort. Maybe it gets sold back to the shop. Maybe the security guards hang onto it.

I'm not sure, but I just hope there's a profitable crime going on, because in such a blatant case, malice is far more understandable than stupidity.

Sorry for the hiatus. Have been on holiday.