No doubt you've heard of the SETI project and the Folding@Home project -- both of which let home computers act as nodes in a gigantic grid computing effort to mine information out of massive data sets.

Well I've come up with a different idea for an @Home project. First, let's talk about diamonds. 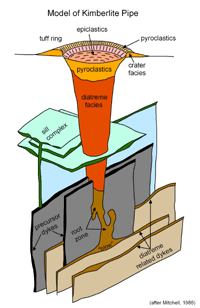 How are diamonds formed? The simple version

Liquid diamond forms when carbon is melted and compressed by over 45000 atmospheres of pressure. This occurs naturally at around 200 km below the earth's surface.

If the temperature and pressure are quickly dropped to surface values, then the liquid diamond will cool into diamond crystals: valuable gemstones. If the temperature or pressure drop too slowly then the carbon will form relatively worthless graphite instead.

There is a geological structure in which a jet of liquid diamond from deep below the earth can suddenly erupt up to the surface of the earth, thus cooling and losing pressure very rapidly, resulting in diamonds, not graphite.

These jewel encrusted, diamond tipped jets of carbonaceous gas and ore are known as Kimberlite pipes, named after the town of Kimberly in South Africa, where a diamond rich kimberlite pipe was discovered, sparking a mad diamond rush in the ninteenth century.

Precious needle in a massive haystack

Although it is over 200 kilometres deep, a kimberlite pipe might be only 100 to a 1000 metres wide at the earth's surface.

Furthermore, not every kimberlite pipe contains diamonds. Some estimates say that only 1 in every 200 pipes contains the girl's best friend.

But given the enormous value of those that do contains diamond, it's worth sampling them all.

Imagine a neural net that carefully analyses images from google earth. If sufficient training data is available, and sufficient grid computing power, perhaps such a system could identify hundreds of potentially diamond-rich sites throughout the world.

Rather than volunteering your spare computer cycles to help cure cancer (folding@home) or discover alien life (seti), you could use it to selfishly aim to become mega rich and fat with bling.

This would benefit humanity how?

But maybe, if anyone is hoping to write a science fiction novel, it might be a nice pasttime for a megalomaniac criminal genius?

(image courtesy of yoinked from Geological Survey of Namibia)