Thanks for a genuine belly chuckle, Joel

Nothing to see here.

Ok ok, an article about the laptop fiasco continues here. I couldn't help it.

You now i love joel spolsky... but you can drive a truck through two bloopers in his latest piece, talking about microsoft sending complimentary laptops to bloggers.

in particular he says:

"...even though the blogger has fully disclosed what happened, their message is corrupting the medium." {emphasis mine}

Corrupting the medium?? What happened to the real Joel? Did alien bugs eat your brain? How on earth could the medium of blogging, in general, be corrupted any further by this particular incident?

Is Joel's universe the same blogging universe that brought us (warning -- totally not safe for work) (i mean it, you have been warned) (i shouldn't even link to this trash, for fear of being bumped from google's index) (in fact i'll link to a google search that will take you there indirectly) this repugnant blog of a canadian man, working in children's television who pretends to be a beautiful nak*d tongan woman?? (the only reason i know about that site, by the way, is thanks to hugh mac-stupid-cartoon-business-cards-leod.) 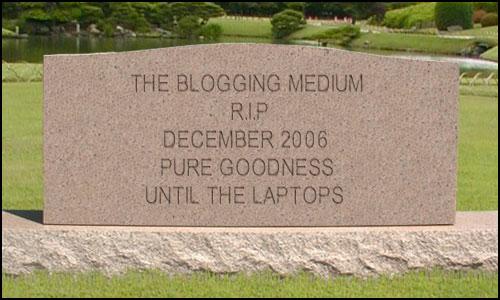 One other thing that bewilders me is when he says:

"...Joel on Software is really a non-profit, advertising-free site..." {emphasis mine, again}

I'm agog right there. I've been a fan for years (and will continue to read Joel on software for years to come, no doubt), but as far back as I remember there were:

...or was I hallucinating all those things?

And there seems to be a lot of this chest-beating and pontificating going on in the blogosphere as people shout their indignance at the very thought that other people should be receiving gifts.

(Something that annoys me most is people who say "unsubscribed!" as if they'll never read another post by the author in question. Come on. It's like a train wreck. You just can't look away.)

Well, aside from that, I should probably have an actual opinion on the subject at hand. My opinion is:

Beyond that, my personal preference is that you should disclose everything you receive. There will be cases when you should out-right reject a gratuity in advance, though there are no hard and fast rules (i don't think it's as simple as rejecting hardware and accepting software, for example). In the case of the current laptops scandal, i'd say:

Sure, it's good when a site has an up-front policy, such as that provided by the Daily Grind -- but i'd only consider this to be necessary for a site that, like the Daily Grind, purports to be objective. In a case like that I'd say the author has clearly exceeded the usual definition of a blog.

But all in all i guess it's just another storm in a tea cup, best summed up by a comment from Mike Torres left at Brandon le Blanc's site:

"Bloggers tend to make things into a bigger deal than they need to be."

(image generated with the tombstone generator)