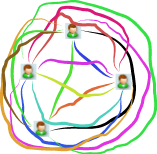 There's a fairly well known (and debated) principle, referred to as 'the network effect' (or 'the communication explosion') which demonstrates how adding more people to a group causes the potential for communication to quickly become complex.

The 'network effect' is based on Metcalfe's law (which was originally concerned with ethernets, not social networks), and it's one of the priciples that underpins a much loved saying among programmers:

Adding manpower to a late software project makes it later.

The 'network effect' for social groups says that as a group grows, the potential for direct communication is in proportion to the member count, squared.

(Usually described as n*(n-1)/2. We divide by two, since each link is two way; we subtract one, since a node can't communicate with itself.)

Meanwhile, the potential for gossip, backstabbing, slander, scandal and rumourmongering grow in proportion to a factorial of the member count.

He said, she said

Let's watch the growth in comminication and the explosion in miscommunication as a small group expands.

We'll start with a company that has two employees, Alfred and Betty. There is one avenue of communication and no avenues of miscommunication.

Now imagine a new guy, Charlie, joins. We now have three employees: Alfred, Betty and Charlie (A, B and C).

There are three lines of direct communication: Alfred to Betty, Betty to Charlie, and Charlie to Alfred.

But, suddenly, we have six potential lines of miscommunication: Alfred passes on what Betty told Charlie about him. Betty passes on what Charlie told Alfred about her.... and so on.

When Dave joins the company, we take on three more potential lines of communication (Dave can talk to any of the existing people). But the potential avenues for miscommunication has, in short time, reached a staggering figure of twenty-four! (i think..)

After I left uni, I hit the reset button on the part of my brain that learnt about permutations, combinations and so on. But i'm pretty sure there's a factorial at work here. I'd like to see the actual equation, maybe have it printed on a t-shirt.

A number of organisational effects exist in any organisation, some explicitly, some implicitly. These structures include things like sub-groups, dominance and subservience, ranking (chain of command), class-systems (or even Castes), cliques, competitive teams and so on. I think the reason why these effects develop is not that it protects the group from "communication explosion."

A far stronger effect is "The Gossip Explosion" which, if left unchecked, would destroy any significantly large group.

Anyway, here's a cute summary of the miscommunication effect:

There are many more ways to talk about someone behind their back than in front of their face.