Art of the command-line helper

The scariest code I ever wrote was the dialog in NimbleText that helps you use the command-line.

Much smack has been written in the past about confusing command-line helpers in other apps, so I set out to build this dialog with great trepidation in my heart.

Joseph Cooney has laid into two particular apps, a gui for wget, and a gui for robocopy. Even Jeff Atwood had a stab at wGetGui. 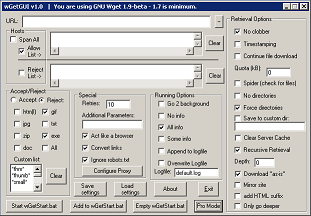 And here's a typical user response upon first encountering such a command-line helper:

I downloaded both these apps and tried them out.

Okay, the kindest thing you can say is that they are comprehensive, and with their use of tooltip text they do offer a little more help than the screenshots would suggest.

But they still give an immediate slap in the face to the end user. Something I want to steer away from.

So command-line helpers are a challenge. And to increase the pressure a little more: the command-line feature in NimbleText is only unlocked if you buy a license. If I'm expecting this feature to be worth money, then I really have to not screw it up.

The first thing was to use descriptive labels, instead of verbatim option names. Instead of having a checkbox named "--rawdata" I'd have a label that said "Raw data". While this is only marginally more readable, it hopefully decreases the effect shown above.

Next I added a textbox at the foot of the form, where the command-line you've created is written, live, so you can see the output of your furious clicking.

Other than that, I just sweated the small stuff. Alignment, spacing, capitalization, tab order, tool tips, everything as consistent as possible.

What I probably failed to do was give The Dialog any breathing space.

(And looking at the screenshot now I see a slight inconsistency with spacing, which should be fixed by the time you look at the application itself.)

Here's what I came up with: 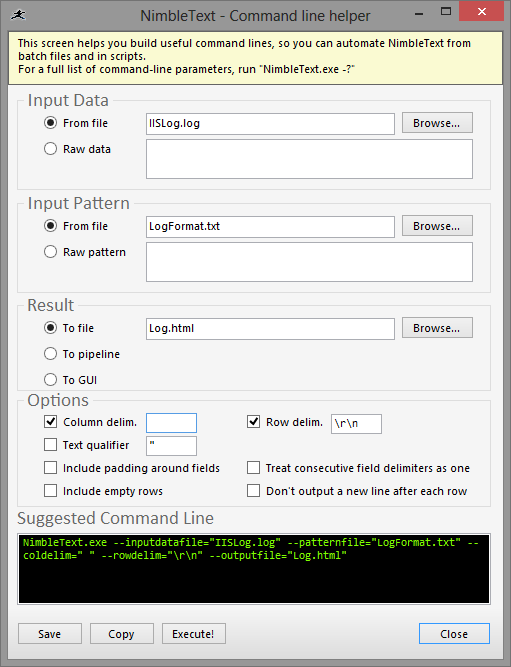 Any suggested improvements? Please send them in.