4 Types of Person (a guide to stupidity)

You're an idiot. Deal with it.

I've been pondering the chronic over-supply of stupidity, and I've come to a new conclusion.

Stupidity itself is not the problem. Abundant stupidity is inevitable. The problem is the people (like you, for instance) who don't even begin to suspect that they are stupid. People who insist they're God's gift to intellectual discourse. But in reality: as thick as whale blubber.

This matrix has four types of people. Stealing an idea from my usability-buddies i've assigned a 'persona' to each quadrant:

And here's my guess at how common (or rare) each of the four categories are.

(I started with the rule that only 20% of people could be called smart, and then assigned a breakdown after that.)

The chief lesson: lots of Homers, very little of everything else. The stupidity vortex is spreading. More on that later.

Why would a smart person (a Spock) decide to put themselves in the third quadrant and become a Columbo? Because they're smart enough to realise that they're really stupid. Stupid for two reasons. 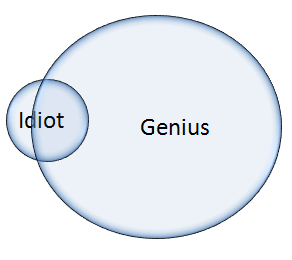 There's two reasons that a smart person should realise they are still, essentially, stupid.

But here's the real kicker: every idiot in the world knows at least one or two things you don't know.

I've gone all out and used Powerpoint to create a Venn diagram (at right) to help illustrates this point.

Here we're comparing a genius with an idiot -- and the size of the circles indicates the relative size of their 'knowledge' or wisdom or intellect or some other hard to measure, but easy-to-chat-about concept.

Clearly the genius has greater brain points -- and indeed knows almost everything the idiot knows. But look out genius, because there's still a little sliver of things the idiot knows that you don't know. And this is a humbling thought.

The idiot won't hesitate to grab onto those one or two tiny points and rub your nose in them mercilessly. Trust me on this: I've done it to smart people many times over.

So don't get too cocky there Spock. Chill out, Yoda. Pull your head in, Gandalf.

To remain humble even in the face of blatant stupidity, never forget:

"Even a stopped clock is right twice a day."

Tattoo that on the back of your eyelids.

But the real lesson is this: if you think you're Spock, you're much more likely to actually be Homer Simpson.

Please, dear idiot reader, err on the side of safety and assume that, like me, you are a mental ass hat with much to learn. We'll all be better off.

Final word: How To Get Smart

One final word though, on a more positive note... it might be possible to actually become smart. Imagine that?

I haven't tried this personally, but according to 'Wetware refactorings' which quotes 'Pragmatic Thinking and Learning: Refactor Your Wetware' by Andy Hunt:

...in a rich environment with things to learn, observe, and interact with, you will grow plenty of new neurons and new connections between them...

Your working environment needs to be rich in sensory opportunities, or else it will literally cause brain damage.