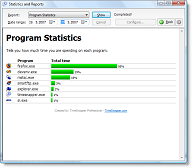 First up is the Productivity Calculator. You can now mark certain applications and certain keywords as 'Productive' -- and then keep track of your productivity.

It takes no time to set it up (there's a wizard!) but it's very effective. Because you have a complete record of how you work, you can focus in on the unproductive stuff -- see how it started, how it progressed and how it ended.

This is really powerful stuff. I've learnt a lot about exactly how I personally slack off, and from that I've worked out what techniques will work to keep me in the zone. In the time I've been using the productivity features of TimeSnapper, my ability to stay focused on a task has risen dramatically. Give it a go -- and if the feature doesn't quite suit you, tell us what would work best for you.

But the biggest new feature is that we now include reports that let you get a quick visual feel of various measurements timesnapper has recorded for you.

We've got five of them in there for starters:

We'll be adding more in future releases. In the meantime, true hackers can also modify the existing ones, as they are xslt based. (Just backup any files you're modifying, in case you go overboard ;-) ).

There's numerous other little improvements, and of course some bug fixes. The release notes are here.

Something I've never mentioned before is that TimeSnapper works nicely on Vista. This has been the case since version 2.0 was released. We haven't got an official Microsoft seal of approval on that yet, so I can't put up a "Works On Vista" logo. Try it for yourself.

Thanks to everyone who's provided feedback at the forums, and to people who tried out the private beta builds.

TimeSnapper's really started to achieve the core features that Atli and I originally discussed. There's still a bunch of stuff we haven't gotten around to, and of course version 2.5 is already well underway. New ideas are still welcome. Marketing is the thing we do worst of all -- so any help in that regard is definitely needed.