NimbleSET 2.0: Death to the VLOOKUP!

Today I've released NimbleSET version 2.0. It finally does all the things customers have been asking for. Things you might need too.

You remember NimbleSET? It's the one that looks like this: 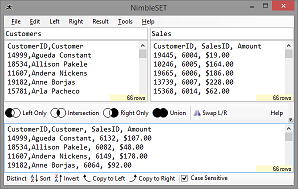 Originally NimbleSET was all about basic Venn Diagram operations, where you compare two lists and see what is the same or different in each list. Useful, but quite limited.

But often our lists are tricky and our comparisons need to be even trickier. Customers gave me countless examples where they would instead be forced to use Excel, and a VLOOKUP. That's right. I feel unwell, thinking of all the VLOOKUPs I could've avoided before now.

So the comparison engine has been given an overhaul. No more VLOOKUPs. Just grab NimbleSET 2.0 instead.

Now you can join on specific columns, or all matching columns (a natural join). You can also match rows where the item on the right is 'contained in' the item on the left, e.g. "Jim Jones" contains "Jones". (In SQL terminology, 'contains' is the same as like '%x%')

I love these tools. I possibly love them a little too much ;-). I don't see how anyone can work in the modern world and *not* have both NimbleText and NimbleSET open and running all the time.

Let me go through the new features in NimbleSET 2.0 in quite a bit more detail. ← explain the benefits, not the features, dummy!

Not again! Jim and Joany are always making each other look like fools!

Where did Joany get the other 11 mugglewumps from? That's what I want to know!

And now YOU step up, our fearless data scientist, with a copy of NimbleSET in your hand.

Pipe down Jim. Everyone cool it.

1. You copy paste from Joany's spreadsheet.

2. You copy paste from Jim's Powerpoint.

With your keen Data-Eyes you notice that Joany's data is tab-delimited, while Jim's is comma delimited. It's the work of a moment to configure NimbleSET accordingly:

We could've also chosen to compare any specific pair of columns... all the possibilities exist in that drop down list.

Now we press '[Intersection]' and see all the rows they have in common. This shows us the 53 rows of data, plus a header row. Let's see what extra rows Joany has... we press '[Left Only]', since Joany is on the left. 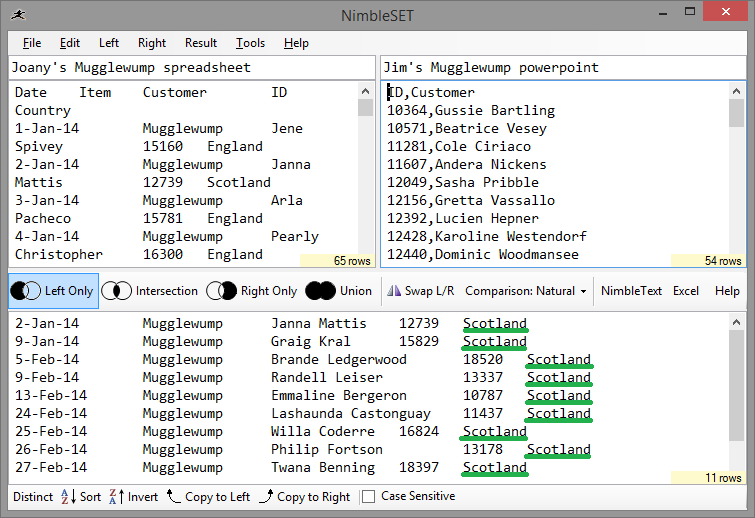 Ah-ha! I see it! Do you see it? We see the 11 Mugglewumps Joany has and Jim doesn't have. And you don't have to be John Nash from 'A Beautiful Mind' to spot the pattern! Old mate Jim has forgotten to include the sales from Scotland! 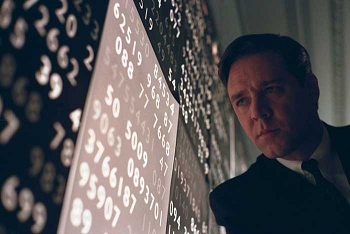 That's right! Jim is an idiot!

And if you want to demonstrate Jim's idiocy, just grab NimbleSET 2.0, keep it handy, and jump out and surprise Jim any chance you get.

Don't forget to "Pin" NimbleSET to the taskbar.

(You've already got NimbleText pinned to the taskbar haven't you?)

As always, any feedback, let me know. Any bugs? Let me know double-quick!