NimbleText 2.0: More Than Twice The Price! 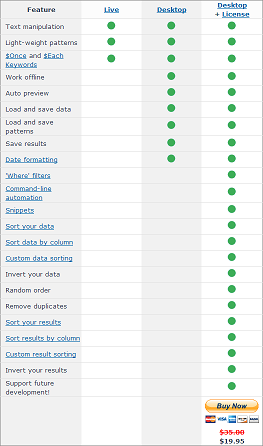 The latest release of NimbleText is a major milestone, took a lot of work, many bus trips.

As a user of the product, I feel it's good now. I don't want to say it's complete -- because I know how big the backlog still is -- but there's a sort of completeness to it. If no more features were added for a while, I think that would be okay.

I added custom sorting features, and auto preview, and more documentation, and a bunch of other stuff.

I even wrote one of those feature checklists you see in all the expensive professional software suites. --->

But then I did something really serious:

I more than doubled the price.

Everywhere I looked, people were telling me to put up the price.

This article crossed my desk today: An eBook pricing model that resulted in $100,000 in sales and contains this quote:

I consulted Patrick McKenzie. Can you guess what he said?

Of course Patrick would say that.

But when I stumbled onto this article, also just today, 'four pricing principles to never forget' -- the following ALL CAPS headline was like a slap across the face:

CHARGE MORE THAN YOU'RE COMFORTABLE WITH

That was it! Enough was enough. I shut the browser! Slam! Opened the html editor! Whoosh! A search, a replace-all, and it was done in less than a minute.

I have unleashed a pricing monster!

Oh, and you'd be wise to get in on TimeSnapper before this pricing madness spreads.