Google caught in a lie.

In the wake of the PRISM hacking scandal, we're all looking at the Big Cloud providers with a slightly more cynical eye than ever before.

So when I noticed a few pieces of intellectual dishonesty at Google Analytics I dug a little deeper than I normally would. And the deeper I dug, the worst things got. Hold on for a, well not a wild ride, more of a gentle somewhat nerdy ride, with a little trash-talking of Google+ along the way.

On the login page for Google analytics, they show you some enticing info-porn to get you excited before logging on.

Something fishy about this pie chart immediately caught my eye:

Look at the largest section of the pie, that blue section. 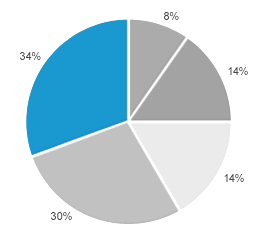 No way is that 34%! It's clearly just over 25% -- what kind of dumb mock up is this? Are they demonstrating their awesome analytic platform by showing us some faulty analysis?

But then I did a coffee spit.

The pie chart is suggesting that the two biggest contributors to your social traffic will be people 'plus-oneing' your content with Google+ (blue), and people re-sharing your content, with Google plus (light blue). In your dreams, Google! Your sad, sad, lonely, social-misfit dreams.

So, I crunched the numbers to see if the percentages of the labels had been tampered with, or the pie itself was altered. Here's the chart I produced, using the same raw numbers: 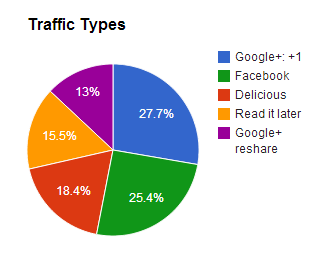 Some more bugs in their image. I'll do these quick fire in an ordered list:

So it's pretty obvious by now that the marketing image is very much a contrived image. But does it have any resemblance to the produce itself? 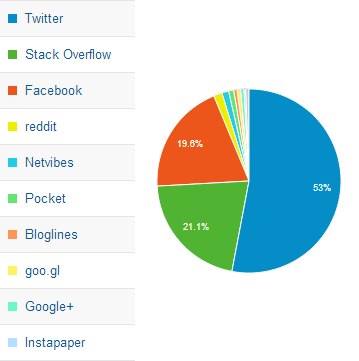 As I suspected, and unlike the mockup, the portions are laid out clock-wise, descending, starting at the top. And the percentage's are drawn inside the pie, not outside of it.

And this time you can tell you're looking at a real Google Analytics pie chart, because Google+ contributes less than 1% of the social traffic.