TL;DR: Hide a short guy under a black sheet, stick an iPad on top, and pay him to go to work in your place.

I have devised a new invention with which I shall revolutionise the workplace, allow tele-commuting to become a societal norm, and thus release us from the stranglehold of fossil-fuelled transportation.

Here's the tag line that will be written on the box when you buy a TPK -- a Telepresent Man Kit:

They say that "80% percent of success is showing up," but if you can't be there in person, you can achieve an estimated 50% of success in life, by sending your Telepresent Man to show up for you.

A TPK consists of a black sheet, two iPads, a game controller and my Patent-Pending USB-Vibrating-Nodule-DeviceTM. In addition to the TPK, you will need to find a short man. He is called 'The Telepresent Man.' 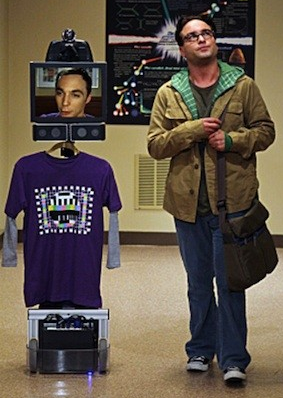 The Telepresent Man is hidden under the black sheet, and an iPad is attached to the top of his head. He needs to be short enough that the protruding iPad is located at about the height where your own head would be. If you were actually in the office, that is. The iPad is running facetime, connected to your own iPad, which you are watching from home. The Telepresent Man is in your chair, at your desk, attending your meetings. But when your colleagues look at him, what they see is your face, on the iPad.

Unlike conventional telepresence devices (such as the one seen on 'Big Bang Theory' pictured at right), The Telepresent Man can walk up stairs and negotiate uneven terrain.

Here's the bit that's patentable, the PPUVND. This is a small USB powered device attached to the iPad. It has four vibrating nodules that are connected to The Telepresent Man, one on the front of left shoulder, front of right shoulder, and one on each shoulder blade. While the stay-at-home-worker moves a game controller, The Telepresent Man feels a vibration in a corresponding nodule and knows where to move next.

To stop your colleagues from feeling the unpleasant sensation of having a stranger amongst them, watching them work, The Telepresent Man's face is completely hidden. He doesn't need to see at all: the stay-at-home worker does all the seeing for him, and can stop him from running into things by directing his every move.

When I presented this idea to my board of trusted advisors, one of them pointed out that almost the exact same idea was used on the television show 'Arrested Development.' A character called George employs a 'Professional Surrogate', Larry, to represent him at family meetings. From what I've read, my idea is completely different. And in unrelated news, Richard Mason has been let go from my board of trusted advisors. And for your information, Richard, Nobody wants to hear about Arrested Development all day.