The Movie Hollywood (And My Wife) Doesn't Want You To See: Weekend at Jacko's

So this is a movie idea for which JoCo Loco really deserves the blame, so please redirect the hate mail in his direction this time thank you very much.

Newspapers spin out, announcing the tragic death of Michael Jackson. Fade to black and our subtitle reads '4 weeks earlier.'

Sound of an old-timey radio announcer telling us that Legendary Musician Michael Jackson has announced a special prize: there are 8 golden tickets hidden inside 8 lucky copies of his new album. The 8 very lucky little boys who find them will be able to spend one magical weekend at Michael's Neverland ranch, chaperoned by the man himself. 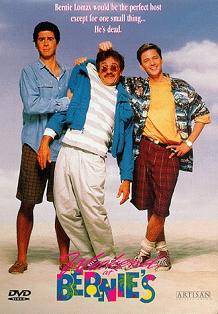 Just before the lucky winners arrive, Jackson suffers a heart attack and falls down dead. After all the publicity that the golden tickets have created, his minders are desperate to go ahead with the lucky weekend, so they prop him up, "Weekend at Bernie's" style, determined that a setback like this won't stop Michael from being the perfect host.

As I've demonstrated on numerous occasions, a high quality premise is all one needs and 'The Self-Writing Script' takes care of itself thereafter.

Whenever the minders get too tired, they throw Michael onto the neverland roller-coaster for a couple of hours.

One particularly touching scene has Jackson (well, corpse-of-Jackson) sitting on a park bench, rather stiff, while a whistful pet gorilla, (Bobo number 2?) reaches an arm around him and gives him a long sad hug of farewell. Violins. Not a dry eye in the room. 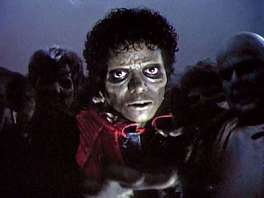 And the big musical finale is an awesome recreation of the zombie dance from Thriller.

Note to self: could the actual corpse of Jackson be used in the film? It would be great to see him dance one last time. Moonwalking, for example, would be easily achieved with pulleys and string.

No doubt, the whole thing is narrated by a drunk and somewhat angry zombie hamster.