I saw a typo in a magazine where someone referred to SysInternals as 'Sysinternal' (singular... they left the 's' off the end)

And this gave me a random idea: what if SysInternals provided a single tool, called 'Sysinternal'.

And it does everything. Just everything. Like the computer that Richard Pryor's character builds in Superman III. Got it?

So I told JoCo Loco this idea -- and he'd sweded up a Compleat Design within seconds:

SysInternal is a console app. The first parameter is the name of the specific SysInternals tool you want to use. The remaining parameters are passed to that tool.

You don't need to have all the tools from SysInternals on your machine already. SysInternal will get what's needed, by downloading from Live.Sysinternals.com. 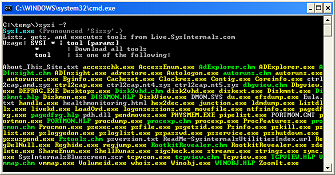 And if you pass the parameter "-?" (or no parameters) then it will screen-scrape Live.SysInternals.com to tell you all the available tools.

I quickly found that the name 'SysInternal.exe' was too long to type out, so I shortened it to 'Sysi.exe', pronounced Sissy. Hopefully this also stops me from violating their trademark. (Mark Russinovich is not a Sissy. Chuck Norris wishes he was Mark Russinovich)

I've released the code on CodePlex, at sysi.CodePlex.Com. 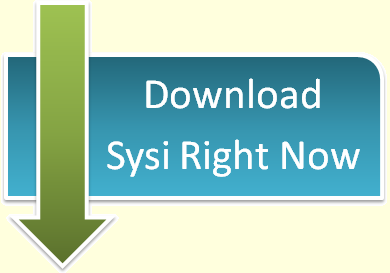