As you may know, I spend the hours from 2:15 am until 3:16 am each day putting the finishing touches on a series of racy, fun, and sometimes controversial big budget films that generally go on to make a major impact at the box office.

One of my recent film-ventures was red-lighted when a principal Cooney-investor relocated inter-state during a sensitive round of pre-production Ponzi-fund-bolstering.

Thus, I expect that various imitators are intending to bring their own cheap knock-offs to the screen to fill the public's unslated thirst. So as a pre-emptive strike, I've decided to immediately publicise the film's gobstopping premise in order to temporarily flood the global market for staggering ideas.

Church attendance figures are woeful and the church is desperate to throw off its image as a sexist, racist, homophobic, straight-laced institution. So they throw away all entrance limitations and welcome a new generation of priests into their hallowed seminaries. 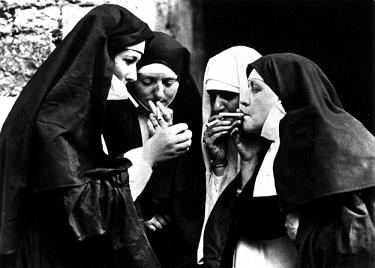 The new class at the seminary would include:

Okay. That's all you need to know. The rest is elementary: the angry bishop, the drunk old lecturer-priest, the misbehaving nuns, the homily-challenge/smack-down, the confessional-punch-up, the fire in the bell-tower, the frankinsence fight, the smashing-through-stained-glass-windows, the whole thing. Done. It Is Written. Word.