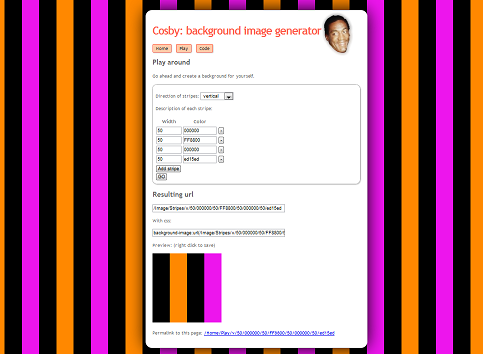 Once you've got Cosby in place, you can start to magically conjur stripy images out of thin air. Just reference a Cosby image as if it already exists, and it will cause the relevant image to be generated spontaneously and stored on disk for eternity.

For example, if you write: "background-image: url(/Image/Stripes/V/20/FFF/1/000);" then you will get a background with vertical ('V') stripes, alternating between 20 pixels of white (FFF) and 1 pixel of black (000). A moment later you decide you want the black stripes a little wider. Just alter the css (change the 1 to a 2) and they will be. No need to jump back and forth between image editor, filesystem, IDE and browser.

Cosby includes a playground where you can experiment with creating your own backgrounds.

While I was procrastinating about working on my talk for WDCNZ I wanted to mess around with MVC's 'FileResult' which lets you return a file from an action. So I resurrected and mutated the idea behind a Gradient Maker I wrote SIX years ago, using asp.net 1.0, and ended up with this latest monstrosity. (Cosby also lets you generate gradients, though I haven't done much with that feature)

The code is published at cosby.secretGeek.net, so feel free to grab it, criticise it, and forget about it.

And of course the name is a reference to Bill Cosby's infamous Cosby sweaters, which get their own detailed write up on wikipedia. I was recently heartened to see 'Cosby sweater' amongst the text generated by the hipster ipsum random text generator.

That's all for now.