What is JSON: the 3 minute JSON Tutorial 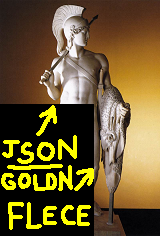 If you are anything like me (and I fear that you are) then this is your experience with JSON so far:

Well I had a slow bus ride home tonight (friday is always slow) and i took a pile of "JSON" tutorials with me. So now I can gently lead you through some BabySteps in JSON.

What does JSON stand for?

[A ridiculous name. It should be called Lightweight Ecmascript Object Notation, or 'LEON' for short. ;-)]

And what does that mean?

JSON is a syntax for passing around objects that contain name/value pairs, arrays and other objects.

Here's a tiny scrap of JSON:

You got that? So you'd recognise some JSON if you saw it now? Basically:

(Or if you're a smug lisp weenie, think "S-expressions", and just be smug.)

JSON is UNlike XML because:

But Why? What's good about it?

When you're writing ajax stuff, if you use JSON, then you avoid hand-writing xml. This is quicker.

Again, when you're writing ajax stuff, which looks easier? the XML approach or the JSON approach:

So this is Object-Oriented huh?

JSON is about as object oriented as VB6. It provides a nice encapsulation technique, that you can use for separating values and functions out, but it doesn't provide anything inheritence, polymorphism, interfaces, or OO goodness like that.

It is certainly a step in the right direction though, making javascript easier to maintain, share and reuse.

And it's just for the client-side right?

Yes and no. On the server-side you can easily serialize/deserialize your objects to/from JSON. For .net programmers you can use libraries like Json.net to do this automatically for you (using reflection i assume), or you can generate your own custom code to perform it even faster on a case by case basis.

Three minutes is nearly up....

As near as a I can tell, JSON was invented by a guy called Douglas Crockford. Read his website if you want, he's pretty funny.

Now Go And Read Someone Who Knows

I've only tinkered with this stuff for a few minutes -- so I've probably said some completely wrong things. If so, please leave a comment, telling me what an idiot i am. I'll be happy to correct any specific mistakes. Best of luck!

(Other side note: Jason and Ajax were both mythical greek heroes. Prediction: other forthcoming technology jargon will include: Heracles, Perseus, Deucalion, Theseus and Bellerophon.)

(To generate JSON, use a data manipulation tool like NimbleText)