There's no getting away from the fact that kids have to do a hell of a lot of rote learning.

As much as we want our kids to be taught to think for themselves, and to develop imagination and creativity and all of the stuff that makes life good, they still need to commit a lot of facts to memory from a very young age.

It's no good calculating "4 * 4 = 16" from first principles every time you hear it. You need to memorize it, and memorize it for life. 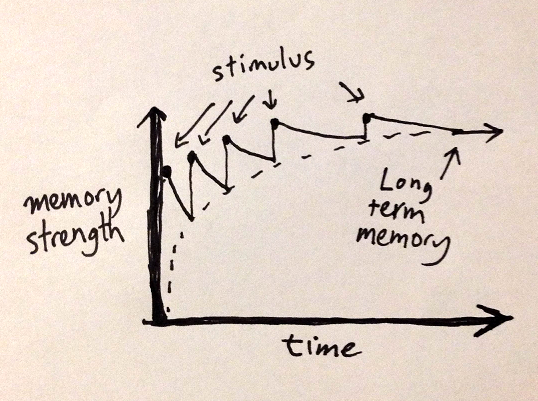 In a nutshell the spacing effect says that you if you are forced to recall a fact right when you were on the verge of forgetting it, you will remember it for longer.

So it occurred to me that there must be some great Spaced Repetition Software for Kids, that I could use to help my kids learn all the boring stuff.

I searched and found none. Zip.

Then I thought, maybe I should write some! I wonder how many people are searching for this stuff every day? So I checked with the Google Keyword tool, to see if there were thousands of parents out there desperately searching for "Spaced Repetition Software." Google Keyword Tool Says No.

Then I thought, maybe it's a latent idea, an idea that is growing in people's minds but they haven't yet reached the point where they search it out. So I proposed the idea on twitter, to see if other people were looking for something like this. Result: almost no response.

So at the end of that research, I dragged it from my "urgent this must be done yesterday" trello board into my "long term someday maybe" trello board.

Note that I didn't validate the idea, or my ability to execute it. I just probed to see if there was an existing market, and it got three strikes. I don't need to validate the idea. Here's the thing: I already know it's a brilliant idea. Seriously, it is. Can I execute it? Probably not very well, since I've never made apps for kids before. But the idea is ahead of its time and the market does not yet exist. So I can't afford to indulge the idea right now.

But plan B is much simpler.

Some day a mega-celebrity will talk about spaced repetition and how it helped their child learn Esperanto at age 3. And suddenly the whole world will be searching for "Spaced Repetition Software For Kids". And they'll arrive, in unison, at this very web-page. Whereupon I'll derive a decent royalty from directing every last visitor to the best "Spaced Repetition Software for Kids" available in that future age. ;-).

(Incidentally my 7-year-old had fair success at using 'Anki' to memorize some times tables. She was relieved when it quickly reached a point that it said "And that's all the memorizing you need to do today." If only teachers would be so wise.)