It's 2006. by now my first personal robot should be obsolete and rusty. but do i have a personal robot? no, damn it. i don't even have programmable shoelaces, or hair that needs a reboot.

Just now i had to get up and fetch myself a spoon for eating my yoghurt. What a waste! Any house robot worth his price in scrap metal could have done that task for me. And all this 'picking things up and putting them away' work that i keep having to do. What a waste of effort! No sooner have i put everything away than it's all scattered everywhere again.

But get me a slave robot and all i'd have to do is stick tiny RFID chips on all my possesions, choose a good location for each possession, and then Snap! At a click of the fingers, my digital jeeves could have everything packed away. and if i need him to fetch me a spoon, or retrieve for me my copy of 'the Hitchhikers Guide to the Galaxy', i'd only have to choose it from the ajaxian application on his display-stomach.

okay -- i've done the hard part. now it's up to you, lazy web. build me a "picking things up and putting them away" robot. and be quick about it. 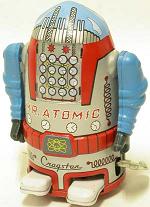 Maybe it's good that i have to do my own cleaning up. You can't outsource physical exercise, so you might as well make it practical.

While thinking robots, i need to point something out: smaller robots are better.

A robot that's half as big is better than a full-size robot.

At half the height, he's half the width and half the depth -- therefore he's one eighth the weight, and hence needs either one eighth the battery, or better yet, he can have have up to eight times the battery life. He's better for the environment, using less fuel, and less raw materials in his construction.

Plus, he only takes up one quarter of the floor space, so it doesn't cost you much in rent. 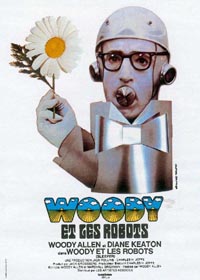 That's why, given the choice between two robots, i choose the little guy.

And for all the same reasons, that's why i propose the following solution to the world's overpopulation problems: let's get smaller.

If people were all halflings we'd be able to fit more of them on the planet (8 times more people!)(On the downside, that's only 1 eighth the soylent green) and we'd all be so much stronger and more agile.

So why don't we invest more of our time and intelligence in researching the genetics of being little.

We could sacrific some of that extra energy to allow for larger brains with which we could devise ways to make ourselves even smaller. Or better yet -- what if we could compress the size of our brains, so that the same number of neural pathways fitted into a smaller volume.

We'd get the same incredible benefits here. The brain would respond much faster, meaning not only that we were far more intelligent, but that we learn more quickly. Our brains would need far less energy and would be able to support thier own weight far more easily. I'm not volunteering my own brain for use in this research, unless i'm dead of course, in which case i'm not the one writing this, so i wouldn't take my word for it.

I think i'll ponder this over lunch and see if i can't solve it on the bus ride home.