My minders and the other people who care for me have told me not to put this blog entry out.

They have told me that it is cruel and bilious. That it is just trash talk and hater-speak.

But I won't be silenced. I cannot be oppressed. The right to free speech is up there. Pretty high. At least 7 out of 10. So I shall share.

Where did they find this freak whose shows up in the VS2008 install? Who is he? What the hell happened to him?

I must have kicked off at least 10 VS2008 installs in the last few months -- and i keep getting more and more freaked out by this guy.

HIS FACE IS TOO SMALL FOR HIS HEAD! His eyes are beady. And they seem to follow your mouse cursor around the screen. Don't they!?

If you draw a line from the centre of his chin to the tip of his crown, you'll see that his face is slightly off centre with his head.

While this could be a genuine congenital abnormality, I think it's the result of poor digital cosmetic surgery.

In their haste to air brush any blemishes out of this guy, they -- the marketing/design people at microsoft -- have removed his face and later pasted it back on, slightly out of place and a little bit too small.

To demonstrate this, I've drawn the apparent centre line of his head in green, and what I consider the true centre line in blue. 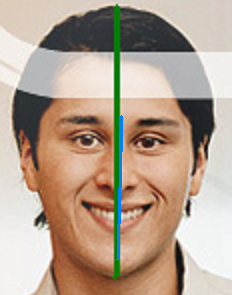 The biggest problem is that his face is simply smaller than it should be. So I've corrected the problem.

Here was my first attempt:

And after a little lip and eye surgery I think he looks even better again. He could go onto bigger things, perhaps appearing in the install for Expression Blend, which I'm told has a much higher quality bar.