Download It Now! Exec Inline: A VS2003 add-in that lets you run a chunk of code 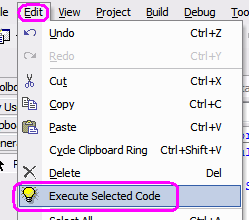 How to install the add-in:

Now when you load Visual Studio 2003, you should find a new option in the Edit menu, called 'Execute Selected Code'

Add it to the toolbar in Visual Studio 2003 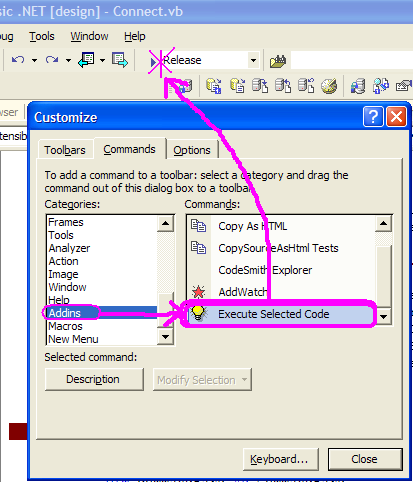 Right click on the toolbar and select 'customize'. Then go to the 'commands' tab, select the 'Addins' category, and find the command called 'Execute Selected Code'. Drag the little icon (with the lightbulb) to a handy place in the toolbar.

How to use the add-in

Sorry it's not Visual Studio 2005 friendly!

When I have a chance I'll create a Visual Studio 2005 version and release that too.

If I get the time, I'll perform a few urgently needed improvements to the code and then release that for ya. I'm really not trying to keep it to myself -- it's just hard to find the time.

When I've moved the project to Visual Studio 2005 then I'll possibly release the source code on CodePlex -- then additions and modifications can be sent in easily. It's a fun little tool, but far too limited in its current state.

All Credit Belongs to...

As I've said before, all credit for this invention goes to these four places:

And help with getting the currently selected text from the IDE, via Kevin McFarlane's VS Csharp Macros page.

CodeProject and MSDN, what brilliant resources! No credit goes to me -- jconwell, dstang2000 and Scott Swigart, they did all the tricky bits.

Also, the idea was partially inspired by Don Syme's F# interactive which I first saw mentioned on John Lam's website -- but mostly inspired by Ctrl-E from SQL Query Analyzer. In fact the more I look into this little side project the less credit I deserve. I am a flea on the back of bigger fleas, ad infinitum.

Thanks to the people who volunteered to beta test this previously. Sorry I didn't incorporate your feedback into this edition, but the words "no, still broken" weren't actually all that helpful ;-) Just kiddin, I appreciate your help. All ideas, complaints will be read thoroughly prior to deletion.