Pay Day for the Ideas Rat

Strewth Ruth. Atli Björgvin Oddsson and myself won the Grand Prize in the Larkware Programming Contest.

How did that happen? I hear you gasp. Well, here's the story. 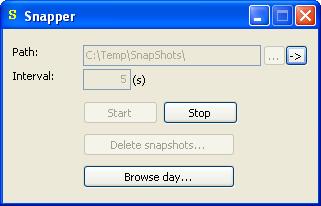 Back in April I had one of those dodgy little ideas that normally falls out of your head and dissappears forever (a DLITNFOOYHADF, or FOOY for short). Fortunately I had a notepad handy, so I jotted it down and soon blogged about it: The Automatic Screenshot Journal.

Some other time, Scott Hanselman blogged about getting a considerable prize ($2500 plus a copy of Visual Studio) in a competition even though his entry took just seventeen minutes to put together.

This was proof that very few people enter programming contests and that unlike the lottery, the odds are stacked in your favour.

When I heard about Mike Gunderloy's Programming Contest (via The Daily Grind, his weblog), I put out a call for someone else to write the Automatic Screenshot Journal.

Two people piped up: one, Charlie, said he'd give it a shot if time permits. Evidently time was short, I never heard from Charlie again. The other respondent, 'ABO' (who I now know as Atli Björgvin Oddsson) said he's already written a version. He sent it to me and it was fantastic. Very responsive, very light on RAM, only a few wrinkles: a good program all round.

I wrote back and told him it was excellent, I also suggested a few changes. But he didn't write back. There was just no word from him at all. I wrote again. I wrote from a different email account. I wrote persistently, but it seemed that ABO had left the world of the internet.

The deadline for the competition drew quite close. I was personally using 'Snapper' for putting my own timesheet together each week -- so i knew it was actually a helpful tool that every office worker in the world should have it on their computer.

So i emailed Atli one more time, this time from my work account. He responded a few minutes later and said he'd never received any of the earlier emails. It seems that gmail and hotmail are blocked by many an overzealous office filter. 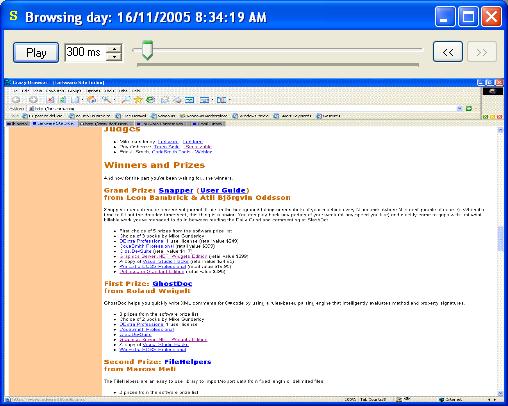 Atli was very responsive about making little changes and went well beyond any suggestions I came up with. As he lives in Iceland and I live in Australia, our hours of operation don't tend to overlap very much (much like that movie Ladyhawke, although I confess to being slightly cuter than Michelle Pfeiffer). When I came into work each day I'd find a new version of Snapper waiting for me. I'd run it, check out the new features and tell Atli what I thought.

I started to put together an entry for the competition and I noticed that the program had to target .Net 2.0. (that was the main point of the competition). This was an issue as it currently used (the more common) .Net 1.1. Also, marks were given for documentation, of which we had none. I wrote to Atli asking if he could compile on .net 2.0, and I set about writing a short friendly user manual (link to pdf version of manual), in my best 'Joel Spolsky' style voice. When I heard from Atli the next day he said he'd compiled it against veriosn 2.0, and drawn the code into a single executable (it used to rely on a separate dll). This was extra good as it meant that we didn't need an installer for the package. With only a few days to go we entered the competition.

There were only about eleven entrants in the end, which is about what I'd expected. I would've been thrilled with fifth placing say, but grand prize is marvellous and not to be sneezed at.

Prizes include Code Smith (we use the free version at work) and Graphics Server .Net. Even the very cool book Visual Studio Hacks (cool... if you're a geek like me that is.)

So next time you see a developer competition, I suggest you do something about it.

As Woody Allen might have said, "seventy, eighty, maybe ninety percent of success in life is just showing up. " ;-)